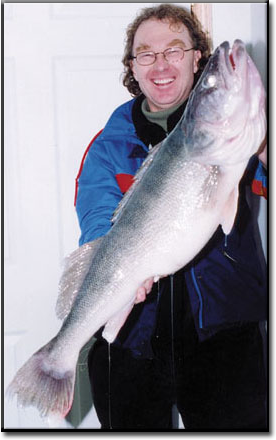 World Record Walleye Through The Ice A Roman Catholic priest broke the provincial record for walleye by .24 pounds with a 18.30-pound catch January 4, 2005. The previous Saskatchewan record walleye, at 18.06 pounds, was caught and released on Tobin Lake in 1997. This is a world record for ice fishing.

Father Mariusz landed his trophy while ice fishing alone in his ice shack on Tobin Lake at around 5 p.m., Tuesday afternoon, Jan. 4. But there's still more.

The fish was caught on a "diamond spinner" about one mile from the Resort Village of Tobin Lake where Fr. Mariusz also has a cabin.

The trophy was landed over a submerged island called Birch Island where some of the old-timers used to log trees, says Silver Tip Outfitters' owner Garry Debienne.

The new Saskatchewan record walleye has a girth of 22.5 inches and measures 36.5 inches long. It is believed Father Mariusz's walleye is the only one caught while ice fishing. All other Tobin Lake provincial records for walleye were realized in open water.