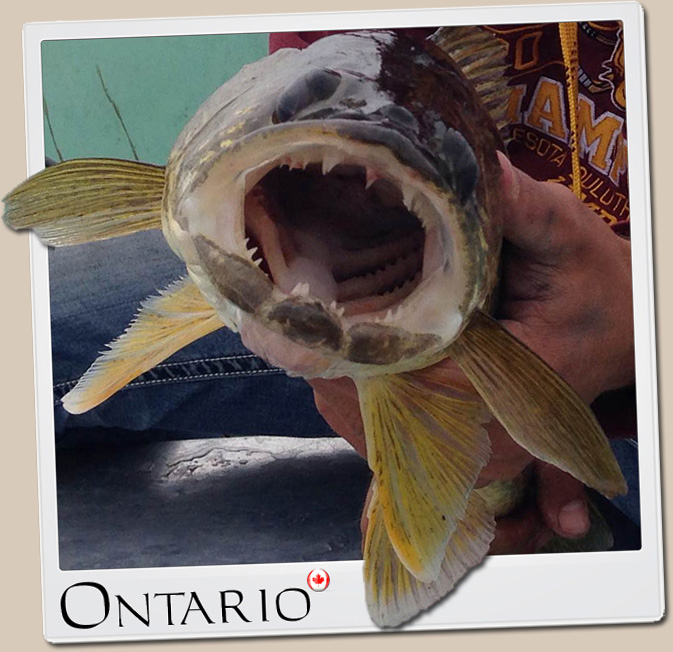 Ontario is the top destination in Canada for Walleye fishing and very few fishermen will disagree. Ontario is vast covering an area 15 times the size of the average US state, and has over 100,000 lakes over 300 acres in size, which many contain multiple species of game fish including Walleye. In this website I stay focused on Walleye Fishing in Ontario and helping people choose a lodge or outpost camp that meets their needs. F.A.Q. is the easiest way for me to answer your Walleye fishing questions based on my experiences, which is guiding for many different lodges across Ontario for over 40 years. Walleye Heaven also contains many fishing tips, articles and links to the top fishing lodges and outpost camps in Ontario.

What is the average size Walleye in Ontario?

I have fished many lakes from Eastern Ontario to Northwestern Ontario and it seems to me Walleyes are most common in the 14" to 22" range. That is on average 0.8 pounds to 3.0 pounds but girth can makes these numbers vary. I used to work for a fly-in lodge 150 miles north of Red Lake, Ontario. We had day-fly-outs to remote trophy lakes. There were two lakes that I remember where it was hard to catch Walleyes under 5 pounds. It seemed the most common size was 6 and 7 pounds. These lakes were only fished by about 20 people per year and a result were so stuffed with walleye it was rare for a fish to get over 7 pounds. There just was not enough food for them.

When do Walleyes Spawn and where?

Some Walleyes will leave the lakes and swim up rivers and stream before the ice is even out on the lake. Generally longer days mixed with water temperature going over 35 degrees signals them to spawn. While in streams and rivers they will dig out a spot in the gravel just like a trout or a salmon and lay their eggs. On average a Walleye will lay around 50,000 eggs. As a female gets bigger she will produce more eggs but less of the eggs are viable embryos. A 12-pound female Walleye may produce 200,000 eggs but only half can be fertilized but in reality many eggs don't get fertilized even if they are viable.

In the lake the Walleyes start to spawn as soon as the ice along the shore starts to melt. Generally they like to spawn on a sandy bottom like a beach but the prime spot is off sandy points where eggs do not get washed up on shore like they would on a beach. By the time Walleye season opens in Ontario the Walleyes have been finished spawning for a couple of weeks. The reason the season stays closed for so ling is because the males will hang around the spawning beds for a week and sometimes two weeks after spawning. Since Walleyes spawn in schools if someone was to find one of these schools; catching fish would be just too easy and create the temptation of keeping more of their limit.

What are the fishing regulations & catch limits in Ontario?

#1) Four fish with a sports fishing license and only one can be over 18.1 inches.

#2) Four fish with a sport fishing license and you can only keep Walleyes between 15.75 and 19.5 inches. Anything smaller or larger needs to be let go.

I think right now the regulations are an experiment. I guide on Crotch Lake, which is about 80 miles north of Kingston. They have regulation #2 on that lake and in the last 5 years I have seen the Walleye fishing get better and better. Not only am I seeing more Walleye my guests and I am are catching bigger Walleye. A link to my guiding page is on the Sharbot Lake page from the menu above.

What kind of accommodations are available in the far north of Ontario?

Camping: There are private campgrounds on good fishing lakes and there are also Ontario's provincial parks. Most if not all provincial parks offer camping; both drive-to and interior or backcountry canoe & portage camping. Even though most provincial parks are known for trout fishing many have outstanding fishing.

Lodges: Most lodges in Ontario offer multiple levels of accommodations, which is usually a main lodge with lakeside cabins or cottages. American Plan means the lodge prepares your meals. Housekeeping Plan means the cabin has a kitchen and you make your own meals. In Ontario modified American Plan, also known as European Plan, means you get a housekeeping cabin with a kitchen but the lodge make you dinner. Google defines European Plan as being the same as housekeeping but that is not correct when describing Ontario's lodges.

My father was a fishing fanatic and taught me everything he knew. My mother was a teacher so as a kid I spent many full summers at the cottage with my mom. During the week there were no other kids around so all there was to do was fish. By the time I was in high school I was working as a professional Walleye guide for fly-in lodges in Northwestern Ontario and I still guide for a lodge near where I live. I was given the opportunity because my best friend's parents, over a period of 20 years, owned three different lodges with all three being located in Northwestern Ontario. The first was north of Wawa, then Red Lake and the last fishing operation they owned was north of Nakina, Ontario. During this time I accumulated a vast knowledge of Walleye fishing. The biggest thing that I have learned over the years is "Ontario Walleye Fishing" is a very generic term because Ontario is the size of France, Germany an England combined. Fishing for Walleye is completely different from one region to another. Most of all fishing in Ontario is very different than fishing in the south.

In my website I have written fishing tips based on fishing different lakes across Ontario. I would like you to read them and consider some different options and tactics that you have not tried before. One technique that is great for one lake may not work in another. The depth of the lake, water clarity, water temperature, oxygen levels, the type of weeds, the structure, other species of fish in the lake and the lake's distance north all affect how they feed and behave. Ontario is a big place with many different regions and habitats. First, it is best to ask the lodge owner what works. Also keep in mind that lodge owners are way too busy to go fishing most of the times so if you are not satisfied with the fishing try different things. You should also try the techniques you are used to because they may prove to be better than what other people are doing on that lake. I want you to come to Ontario and have the best Walleye fishing trip of your life. My email is below if you have questions.

Every lake is different and the best baits to use when Walleye fishing always change. If you are not willing to change to what works on the lake you are fishing you can find yourself feeling disappointed. On some lakes Walleyes love minnows and/or leeches and on other lakes the Walleyes won't touch them. On some lakes they like artificial lures like Rapalas and Thundersticks and on other lakes the Walleye won't touch them. In the far north Walleyes go crazy over Walleye gullet but in central, southern and eastern Ontario the Walleye won't touch it. It's crazy I know but your willingness to switch-up baits when you are not catching fish is key to your success. If you are going on a fishing trip make sure you ask the lodge owner what works because if you think the Walleyes hit the same baits as they do back home or they did at your uncle's cottage you are most likely wrong.

There is one thing for certain: Walleyes everywhere love worms (night crawlers). Below is generally what you should have in your tackle box when you are planning an Ontario walleye fishing trip:


This is just a basic list. My fishing tips go into this with a lot more detail.

The Biology of Ontario's Walleye:

The scientific name for Walleye is Sander Vitreus. Most people in Ontario used to call them Pickerel but back in the 60s somebody started calling them Walleye down south and that name slowly made it's way north into Canada and by the mid-90s most people in Ontario accepted the new name as Walleye. A few of us old timers still slip once in a while and call them Pickerel.

A Walleye will grow about 3 inches per year for the first three years and then their growth rate slows down. As they grow the rate of growth slows down. By the time they reach 30 inches it's most likely around 20 years old. The farther north in Ontario you go the slower a fish grows but because of the lack of parasites and disease in cooler northern lakes, fish farther north live longer and healthier so in Ontario they can reach over 35 inches. The MNR has caught many over 25 pounds through netting studies, which is far bigger than the current record. There have been stories of a trapper north of Nakina catching a 40-inch Walleye through the ice and feeding it to his dogs.

Ontario has thousands of the best lakes and Walleye fishing is more popular and in more demand than all other sportsfish put together. Because of their poplarity in the USA American fisherpersons bring 2 $billion into the northern economy every year and we dearly thank you for that. You could say mining, forestry and Walleye drive the northern economy.

Please take a look through my fishing site and check out the lodges I have listed right across Ontario. I also have tons of fishing tips, techniques and interesting research information to look at. If you are looking for an Ontario fishing trip and not sure where to go fishing or not sure where the best Walleye fishing in Ontario is, then tell me your needs and I will help you. Email me at gary@walleyeheaven.com.